Historically the Mediterranean sea has always been a basin recognized as a melting pot of races, religions, traditions, maritime and cultural exchanges which have followed over the centuries, giving rise to interesting and refined customs, techniques and handworks.

One of these is the Genoese mezzaro, a large squared cotton cloth of about 2.5 meters per side, printed with colorful floral patterns.

The ancestor of the Genoese mezzaro are cuts of printed cotton arrived in the Mediterranean area since the medieval time through the spice merchants from the East.

The two main textiles routes from Asia to Europe at that time were of Venice and Genoa’ s monopoly: Venice preferred to trade with India and Persia importing cotton and silk fabrics through the sea, bordering the coasts of the Red Sea, reaching Alexandria in Egipt and finally heading for Venice, while Genoa kept good relationships with Siria and Turkey, mainly trading cotton textiles from Aleppo and Smirne, and getting cotton items from Marseilles and Livorno.

During the middle age and the Renaissance printed, patterned fabrics and wide clothes from Asia were already popular in bridal trousseaus, they were called “meizeri” and used for multiple purposes in rich houses and churches, like curtains, drapes, bedspreads etc. They were also mentioned with specific names indicating their provenance such as “Turkish”,” Indians” etc. In the sixteenth century the English and Dutch Indian Companies developed these textile trades. Initially printed fabrics carried simple flowery patterns, the lighter ones and muslins were used in clothing and called “indiennes” (Indiane), to differentiate the already developed production of heavy, plain, cotton fabrics such as fustian twilled cloths (the ancestors of our blue-jeans).

Along the centuries the Eastern original patterns on the printed cotton fabrics arriving from the East got richer and richer showing religious and symbolic drawings belonging to their original places, nevertheless they were immediately appreciated on textile decorative items in the Italian and European noble homes.

These printed fabrics, in fact, were considered practical, dyed in bright colors and in particular they bare the charm people attributed to everything coming from the East. Once they arrived in Italy through the port of Genoa they were the source from which the Genoese craftsmen drew inspiration to create, a century later, their "Genoese Mezzari". 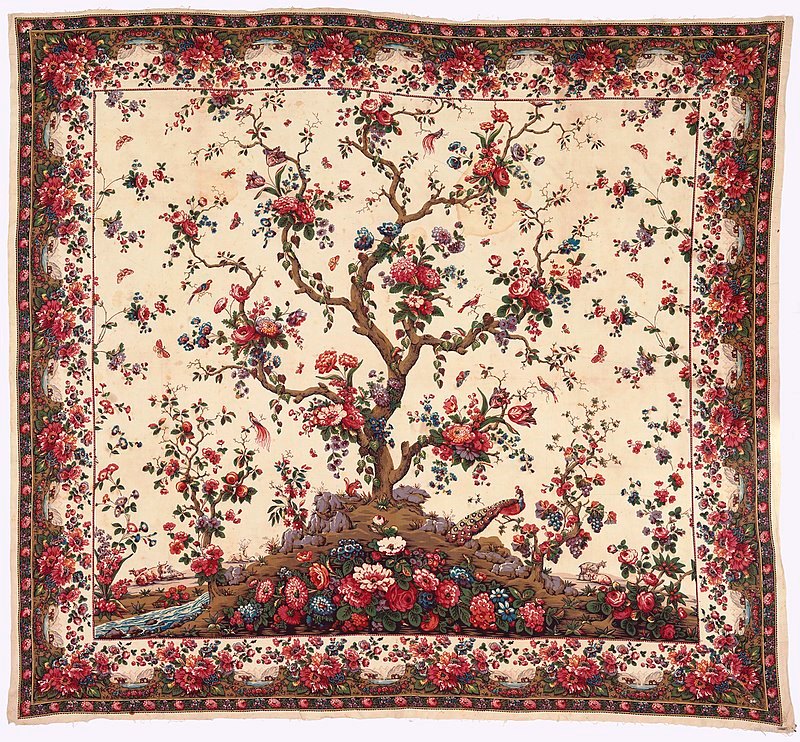 The name mezzaro or mezzero or mèṡere or mèṡero is a term that comes from the Arab tradition, another great cultural influence in the Mediterranean (which has influenced languages ​​and customs), and precisely from the old Arabic term "miza" which means "to cover" or "to hide": in Genoese it became "mesiar" and then "mezzaro". With this name was also called, in the second half of the XVIII century, the large square cloth in cotton or linen, richly printed in color, mainly with imaginative designs of trees, rich in fruit and flowers and with animals around them, typical of the symbol of the Tree of life.

Shown in many ancient cultures, the tree of life is a recurring spiritual element in the history of humanity: although with different connotations its meaning does not change, it still represents the beginning and development of life. That's why in such a multi-racial and multi-religious context as the Mediterranean area, this design / symbol, although coming from distant lands, was able to take root and meet the taste of the population, even in a more frivolous context such as furnishings and fashion.

In the Genoese Mezzaro, the old Indian representation of the tree of life is maintained, although stylized, but very decorative, inspired in particular by the Indian sheets called “palampores”, already used in India as bedspreads.

According to the Indian tradition the tree was conceived as planted on a flowery hill and then departs in a complex tangle of branches rich in flowers of various kinds as an auspicious symbol of joy and abundance. On the Genoese mezzaro the design has remained faithful to the original configuration to the point that its analogies can still be identified with the Indian prints both in the central subject and in the border, represented by a succession of paisley floral motifs. Although in different keys and representations, the tree of life is the central theme of the Genoese mezzaro in all its variants.

The technique of printed canvas has Indian origins, the oldest printed fabrics whose traces remain, in fact, date back the 6th-7th century AD, and come from India. In Europe the most used and known fabric printing techniques started in the second half of the eighteenth century, and precisely the color woodcut one(also called woodblock) : up to eighty pieces of engraved pear or lime or chestnut wood were sometimes needed, dipped in color and used as a stamp, for a complete print. The mordant was a big issue for printing stable colors on fabric at that time, as a different mordant for each color used was needed. Usually colors were based on vegetables minerals mixed with their proper mordant (acetates). The whole cloth, freshly printed, was then dipped into a bath of madder in order to let all the colors appear, finally it was rinsed thoroughly. 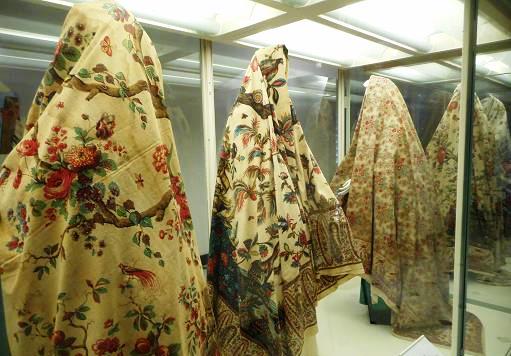 The custom of covering the head with large handkerchiefs, as well as the name given to the printed cloth, was in use in Genoa since the Middle Ages while the traditional design that is now associated with the mezzaro is of later introduction and dates back to the seventeenth century. Mezzari were initially used as furnishing accessories and later, in the second half of the 18th century, also in clothing such as women's shawls and capes.

The mezzaro worn by the noble Genoese ladies was a symbol of power and wealth and the growing demand for them made numerous artisanal spinning mills develop both in the city and in the Val Polcevera along with textile printing workshops. The local production of mezzari in Genoa area was due to craftsmen who travelled to India on purpose and learned the stencil technique over there. These craftmen were precisely called 'indianatori', most of them were Armenian, already settled in Genoa for a long time and specialized as weavers and printers. The flourishing production of the Genoese mezzari was then exported all over Europe, especially to England where they were highly appreciated. At the end of the eighteenth century the mezzaro was abandoned by the aristocracy as part of their outfits, and became more accessible to lower classes ladies and so remained a fundamental part of the Genoese folk costume, folded in two to cover the head and shoulders. It was placed on the head and fastened by a pin. The old original pieces, now part of precious collections, are in fact all worn or pierced in the center. The Genoese commoners draped themselves "pour se promener dans la ville" (in occasion of their outings in town)- according to the numerous testimonies collected in Genoa by visitors coming from outside Genoa during the period from the second half of the 1700s to the late 1800s. Even now the mezzaro is used in present festivals and as part of the folk female outfit of Genoa area.

Back to the same centuries, in addition to mezzari, women also wore the so-called “pezzotti”, smaller and rectangular cloth, of lighter cotton which was used in the summer. The typical designs reproduced on pezzotti were always floral ones but of smaller size and in denser pattern, often also taken from the ceramics of Savona patterns. Pezzotti had a only two edges printed, one upper and one lower, to delimit the central design. Finally, in common use among the commoners were the "Mandilli" (kerciefs or foulards), to wrap the head only, which were knotted under the chin. Mandilli were also used to tie the 4 nocks together and make bags, the so-called "groppo" or to cover the baskets’ content. 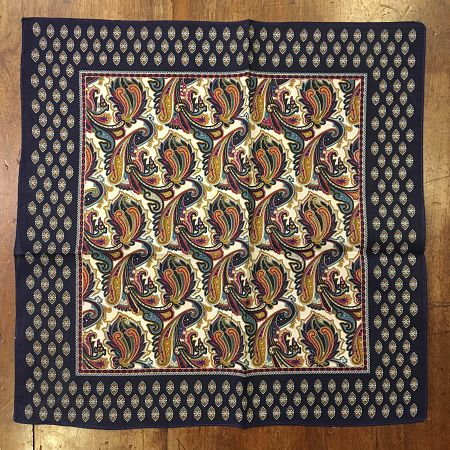 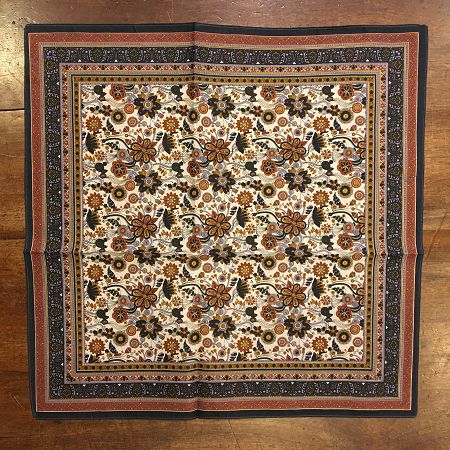 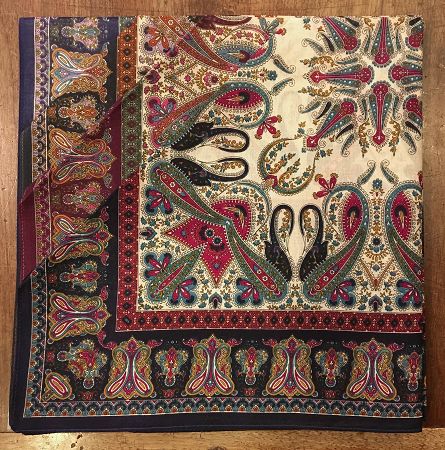 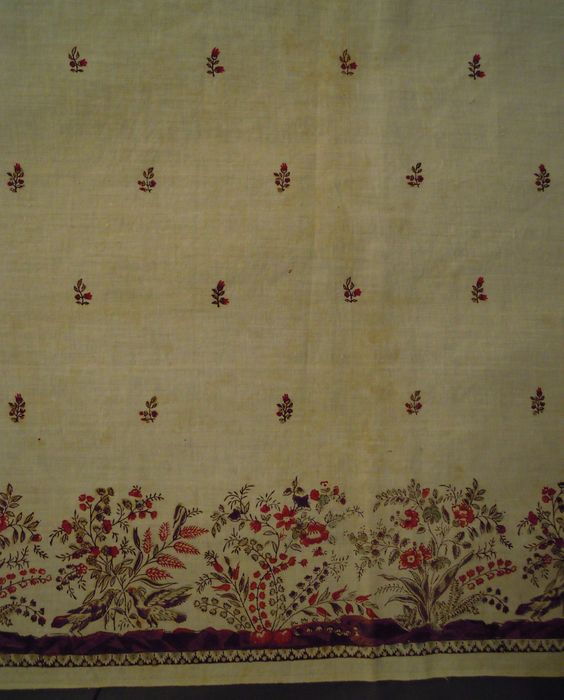 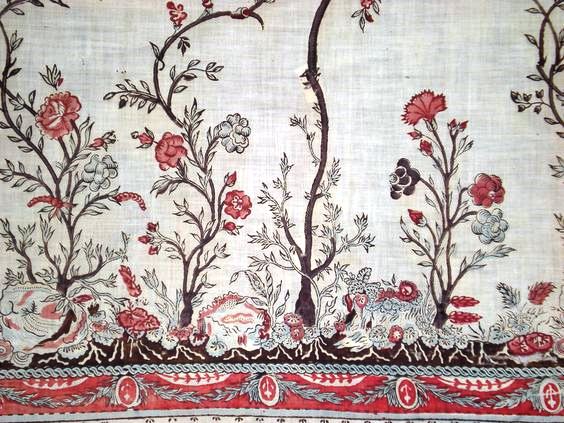 These three types of items reached their maximum splendor in Genoa between 1787 and 1860, thanks to the most known textile factories by Michele Speich who started in late XVII century, and Giovanni Testori, his follower and son-in-law, who concluded the production in late XIX century.

Their mezzari do not hide their reinterpretation of the previous Indian "palampores" reproducing the hill ( "imbricata", in Genoese language), tamarinds, palms, herons, drinking fountains and Chinese little details ( "Cinesini") up to imposing themselves on the western culture. 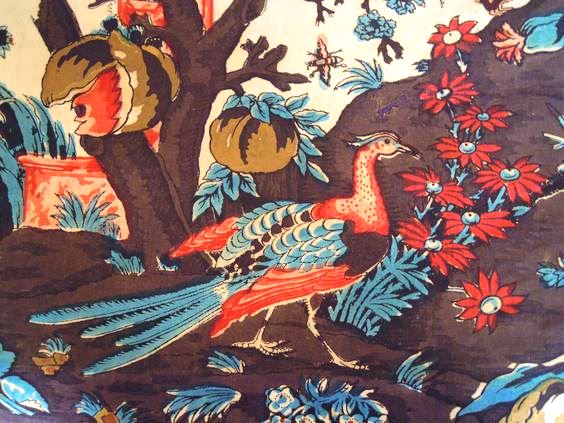 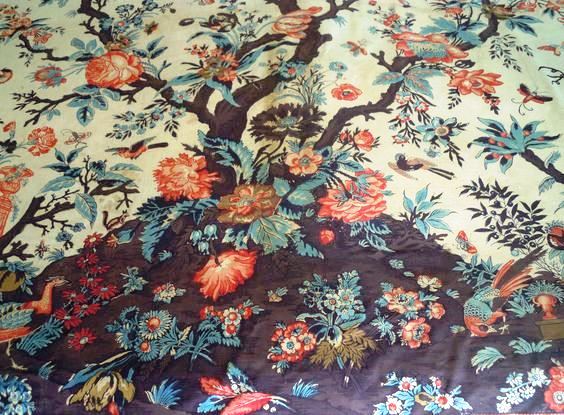 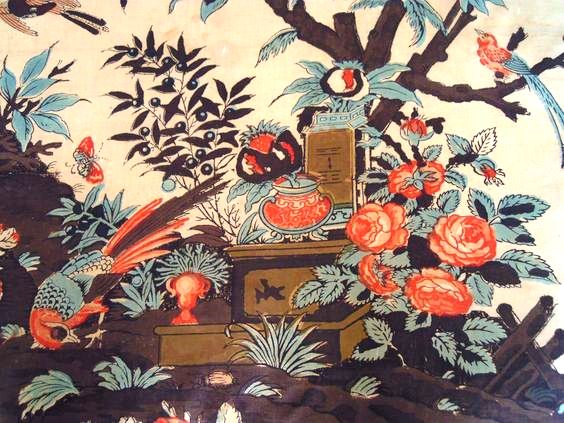 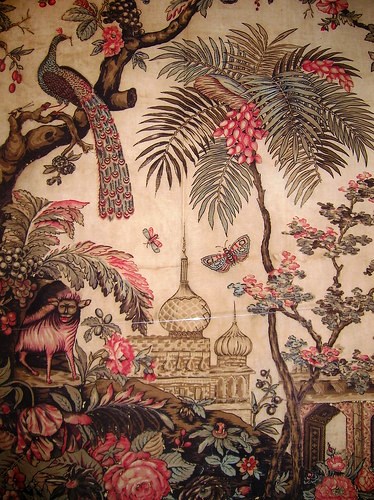 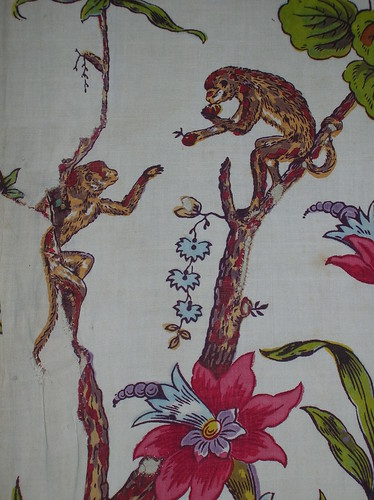 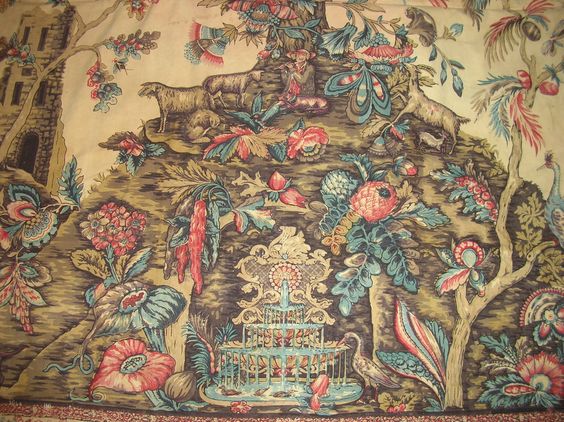 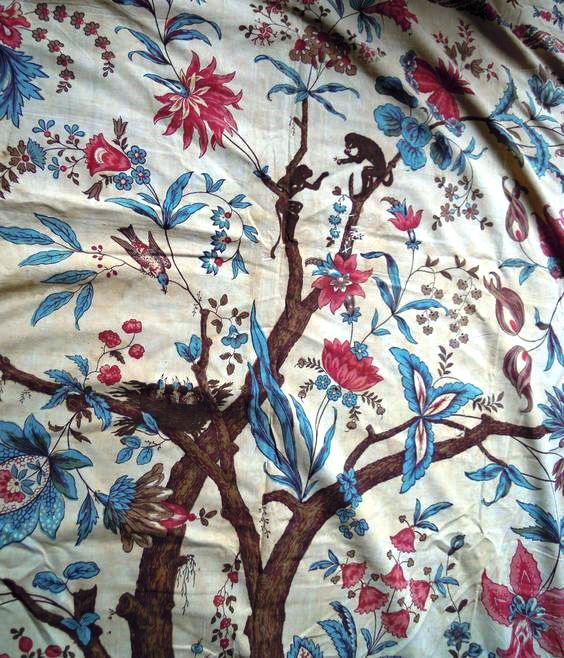 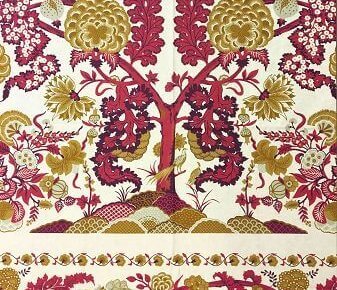 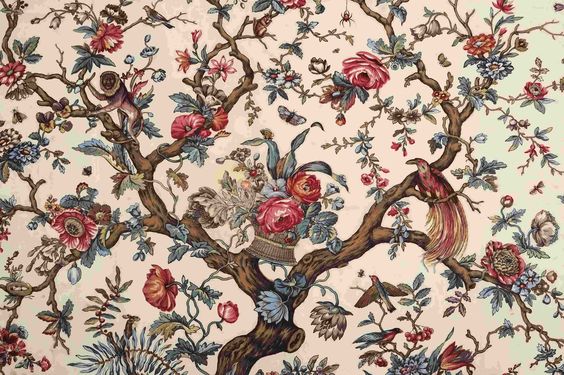 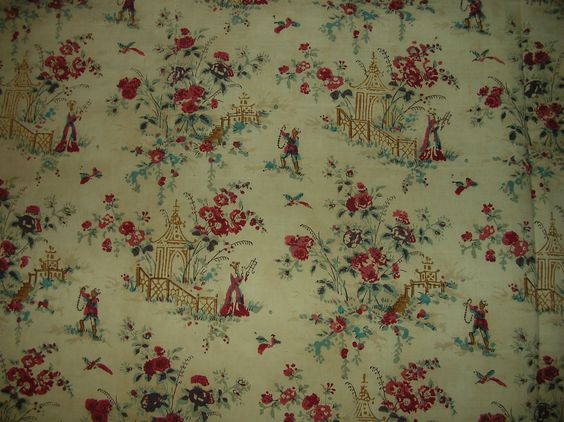 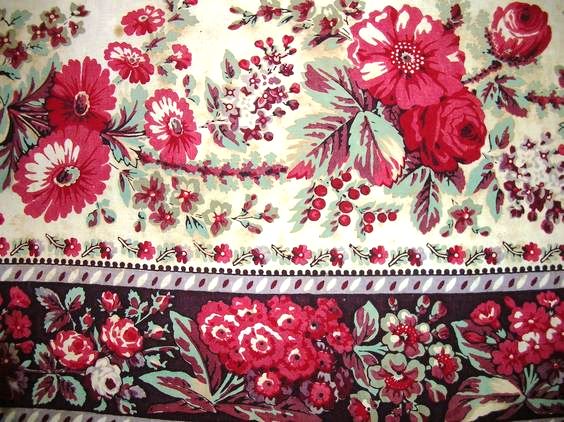 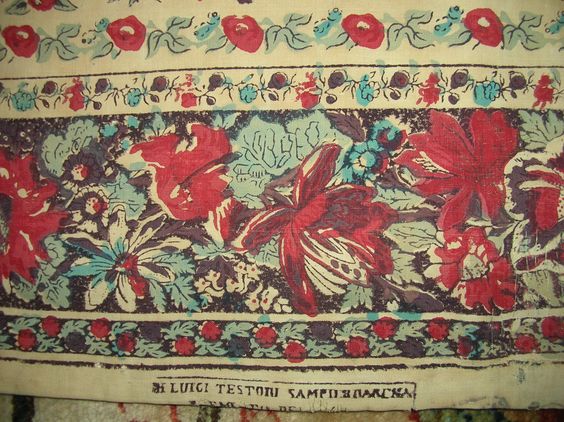 Among the patterns these two factories created, we have the “Old Tree” one,

come on the market in late eighteenth century, showing stacked rocks in a form of staircase ending in nothing,

along with the Love pattern (Mezzaro dell’Amore), carring numerous pairs of animals and recognized as very typical of Genoa.

The Chestnut Mezzaro was created since the early nineteenth century by the Speich manufacture and then by the Testori one with great success. It is a variation of the Tree of life subject, where the tree is representing a chestnut tree richly adorned with anemones , primroses and tulips. In the traditional subject some animals like pheasants, other birds and bees are also part of the pattern. The composition is more natural and less stylized than the original, but suffers from the nineteenth-century taste for chinoiserie.

Roses Mezzaro is very similar to the chestnut mezzaro and created by the same manufactures, it shows a particular pattern very rich in flowers in which roses and large pink peonies of large size stand out, arranged on the branches and at the foot of the tree. Overall, it recalls an eighteenth-century Baroque French style.

Less known was the "Nave" mezzaro pattern (the boat pattern), with the ruins of a castle and the boat, a precariously balanced giraffe on the raft on the right side, and an admirable border with a leaf motif , copied from the famous paisley motifs (rounded tipped leaves as in "cashmere" use).

Another appreciated mezzaro pattern is the Litanie one ("mezzaro delle Latanie"), from the name of a native plant from Africa, similar to a palm tree, followed by the "red monkeys" mezzero pattern, perhaps the least traditional printed on the old mezzari.

Macaco or Monkey Mezzaro's pattern was also drawn by the Speich manufacture and later re-proposed by Testori one (whose records dating 1927 are kept at Palazzo Rosso museum in Genoa). The pattern is a rich mix of exotic subjects: hoopoe, rabbits, peacocks, parrots and tropical fruit. The ever-present tree of life rises from the riot of abundance and a small monkey (in Genoese called macaque) hangs on its branch. Finally the Mezzaro is surrounded by a sumptuous border. The pattern composition denotes an evident reference to the late 18th century French weaving

The small cows mezzaro pattern (mezzaro “delle Vacchette”), instead was chronologically the last one used in production.

Flowery Mezzaro pattern is one of the first directly reproduced in Genoa from the indian ones, its iconography refers to the Rose Tree, the representation no longer highlights the central figure of the tree, but the typical intertwined trellis of branches is maintained. As the name suggests, in fact, their branches are studded with flowers of various kinds, including peonies and roses. Some testimonials attest that this patternwas in vogue in Genoa towards the end of the eighteenth century.

Finally, imported directly from the east, the "Indians" printed canvases stood out, including those reproducing small elephants ("Elefantini" ) hence the "white elephant" pattern in the so-called mezzaro, or those with "darts", and many others , all different from one another not having been, over time, serial production in the eastern countries of origin.

Today mezzari, which are still part of the Genoese houses’ decoration in form of bedspreads or furnishing accessories, are mostly printed in screen printing.

Exceptionally it is possible to find traditional ones, imported from India, made with the ancient woodcut technique.

The Genoese mezzari still printed nowadays in Genoa are based on 4 main designs, the most authentic with Rivara production copyright, and sold to the public through their historical shop, downtown Genoa, right next to San Lorenzo cathedral.

The "Villa delle Palme" school in Recco, the school of German Jewish refugees students in the 1930s