The hazel tree is found throughout the Ligurian territory both as a spontaneous and cultivated plant. Since the past in the eastern Liguria its cultivation is concentrated in the Tigullio’s area (the hinterland of the gulf with the same name) including Sturla/Aveto, Fontanabuona and Graveglia valleys. The earliest traces of the hazelnut cultivation in this area date back to 2,500 BC, according to the discovery of fossil hazelnuts in the bogs of Rezzoaglio, in Aveto valley, but it’s since the Middle Ages that hazelnut has been an important economic item for the local agriculture.

The first documentary evidence attesting the practice of this activity in a period between the beginning and the end of the 16th century dates back to the late Middle Ages. It is a series of notarial deeds belonging to the Chiavari notary archives, followed by other documents drawn up in the following centuries in which reference is made to the predominant role of this crop in the local economy, especially in the municipality of Mezzanego. Around the middle of the last century, hazelnut cultivation experienced a period of such prosperity as to partly supplant that of the chestnut tree marred by serious phytopathologies which had affected numerous trees.

In a publication of the former Agricultural Committee of Chiavari, dated 1876, we read: "Among the special crops of the district we distinguish that of "avellana (from Corylus avellana, hazel). The production of hazelnut is mainly distributed in the Municipalities of Mezzanego, S. Colombano and a few others." In more recent times the hazelnut cultivation in the eastern Liguria has had its moment of maximum diffusion in the 60s and 70s. , when between 5 thousand and 10 thousand quintals of hazelnuts were harvested in the area around Mezzanego and San Colombano Certenoli, 370 hectares were cultivated (296 of which in these two Municipalities), and even if the depopulation of the countryside in the post-war period has certainly not spared these valleys, the production has never been abandoned. For some years has registered instead a lively increase. 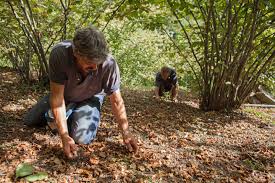 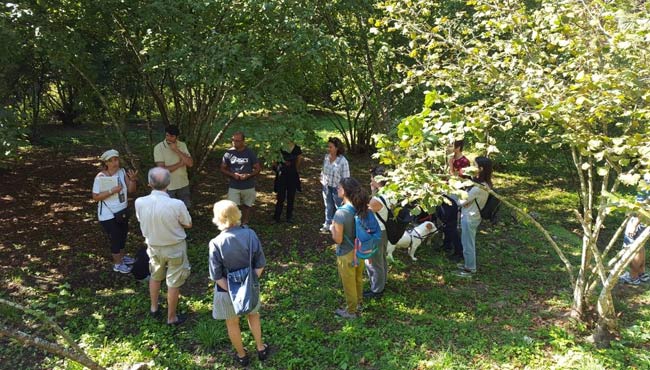 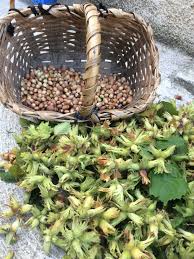 Unfortunately a severe decline in the production of Ligurian hazelnuts started in the 80s, caused by competition with non-European countries, primarily Turkey. The abandonment of the countryside, consequent also to the scarce remuneration of the work, contributed to the degradation of the hazelnut groves and its landscape, very suggestive for the characteristic terrace accommodations, on which this plant was cultivated. The plants were in fact kept quite high due to the dense planting layout and the harvesting was done manually without the use of facilitating means (shakers and suction machines).

It is well known that the Ligurian agricultural environment is a vertical and impervious one that generations of farmers have tamed by terracing it.

It is also a highly variable environment in terms of soils, due to its incisive orography, with often opposite characteristics because of varied exposures, structures, slopes, etc. The locals, who have struggled on these mountains over the centuries, have had to adapt the crops to the variability of the territory, finding in the hazel a very valid ally. They have meticulously selected the spontaneous varieties of hazel trees suitable for different soils, then experimented their yield: a slow job that constitutes the true heritage of the Tigullio valleys.

The set of different hazelnuts was marketed mainly through wholesalers: most of the product ended up in the Piedmontese confectionery industries, while a small portion was destined to local artisan companies for confectionery and pastry processing. Since the economic and commercial capital of the area has always been Chiavari, the hazelnuts of the area were given the name of Misto Chiavari, consisting of the Del Rosso and Dall'orto varieties (more sensitive to drought and therefore more delicate) still present in particular in the Val Fontanabuona area (San Colombano and neighboring areas), the Tapparona variety still present today in the Sturla valley, and other smaller sized ones, the Sraeghetta, the Bianchetta, the Menoia, the Longhera and the Trietta.

The current relaunch of the Misto Chiavari hazelnuts passes through the revaluation of their real value linked to the most authentic concept of agricultural biodiversity. In fact, each of them thrives in specific conditions, there is a variety suitable for fertile soils, one for the sunny, one for the arid, one for the drought. This perfect synthesis of biodiversity has stimulated new interests in the transformation and marketing of the product. The oil obtained from local hazelnuts, for example, has proved to possess absolute valuable organoleptic qualities, finding a great market success. The same can be said for the hazelnut creams and other derivatives, liqueurs, flour on which typical Ligurian handmade pasta such as spaghetti, reginette and of course the troffiette are based , also registering an extraordinary appreciation even beyond national borders. Also Slow Food has noticed the unique value of the Misto Chiavari hazelnuts and it is contributing to the enhancement of the product through the creation of a Food Community dedicated to the hazelnut producers of the Tigullio valleys. 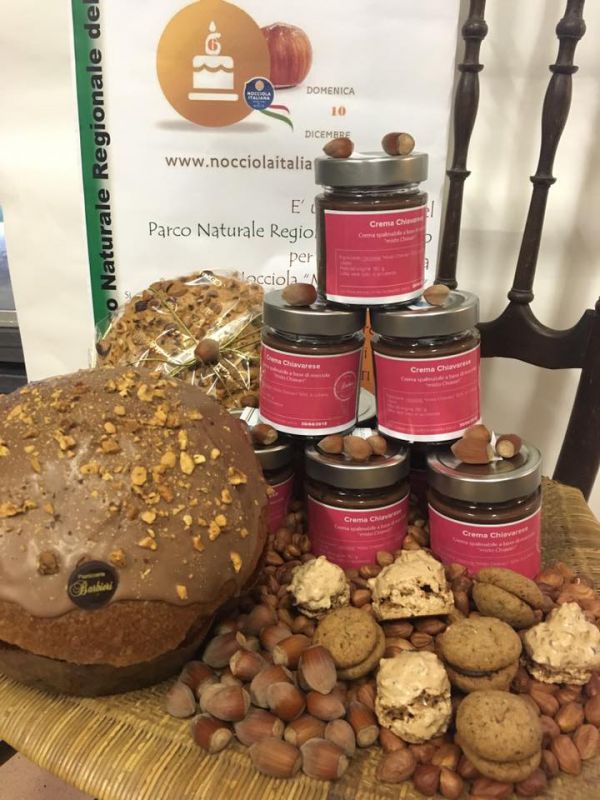 In addition, the MCG Collective Geographical Mark was recently awarded to Misto chiavari, which is also extended to agricultural producers and processors who make sweet specialties (spreadable cream, chocolates, baci di dama cookies and other desserts), oils and other products based on Tigullio hazelnuts . The Ministry of Cultural Heritage also included the Tigullio hazel groves in lands of historical and cultural value, calling them “Tigullio hazelnut terraces”

The old Cogozzo factory in the municipality of Mezzanego is one of the few artisan hazelnut processing places where the last shelling machine used when the production of this fruit was the main economic activity of the valley, is still available and working. Mr. Tullio, the last descendant of the Cogozzo family who partially experienced the golden age of hazelnut, welcomes visitors to the factory telling interesting anecdotes about this particular cultivation and production.

Today, especially in the north-eastern part of the Sturla Valley, in the heart of the Aveto Regional Natural Park, despite the progressive abandonment of the crops, these fruits represent a true excellence of the local tradition, and they are celebrated every year with local festivals.

In memory of the fruitful period of Ligurian coeliculation, for example the territory of Leivi has to be mentioned, being directly bordering the municipality of San Colombano, which in the 60s and 70s had its moment of glory with the cultivation of hazelnuts. Despite the fact that today the production and sale in Leivi has almost disappeared, the memory of this local activity remains alive in the population through the many recipes of hazelnut cakes with which the Leivi families tried to win the first prize at the Golden Hazelnut Festival, held every year in August. As proof of the long tradition that characterizes the cultivation of hazelnuts, traditional crafts linked to this activity had gradually spread in some areas of the production area. In Val Carnella, for example, in the municipality of Mezzanego, during its festival dedicated to hazelnut, it was used to make the typical hazelnut necklaces called "reste".

Recently the bet of the Mezzanego Agricultural Cooperative (150 members of olive oil producers, including at least fifteen small producers of hazelnuts), in order to revive the sector, was on the price: "We decided to pay the producers more - Mario Dodici, the cooperative chief, explains - and this policy is having success, we would like to stimulate the restoration of abandoned hazelnut groves and thanks to the Chamber of Commerce’s support we can now collect the crops of those producers able to provide hazelnuts of the eight cultivars admitted in the “Chiavari mixed brand” ».

The recovery time of an abandoned hazelnut grove is short: 3-6 years to get up to speed. A hazelnut tree does not need great maintenance, but until now the big obstacle was finding to whom to sell the product, while today, judging by the participation in the presentation of the brand, a chain seems to be set up , including bakeries, restaurateurs, chocolate manufacturers, processing companies who sell to ice cream shops, but also producers of vegetable oils.

The Rossignotti confectionery company in Genoa, led by Mario Rossignotti and his heartfelt bond with the territory and Ligurian history, has always made up the Gianduiotto hazelnut paste, the flagship product based on half quantity of Ligurian hazelnuts and half quantity of Piedmont ones, in the seventies. Today Rossignotti company has created a synergy with the territory, producing a spreadable cream with mixed Chiavari hazelnuts, cane sugar and cocoa paste, the same ingredients used for the Gianduiotto paste. The spreadable hazelnut cream from Rossignotti has already been exported to US with success. 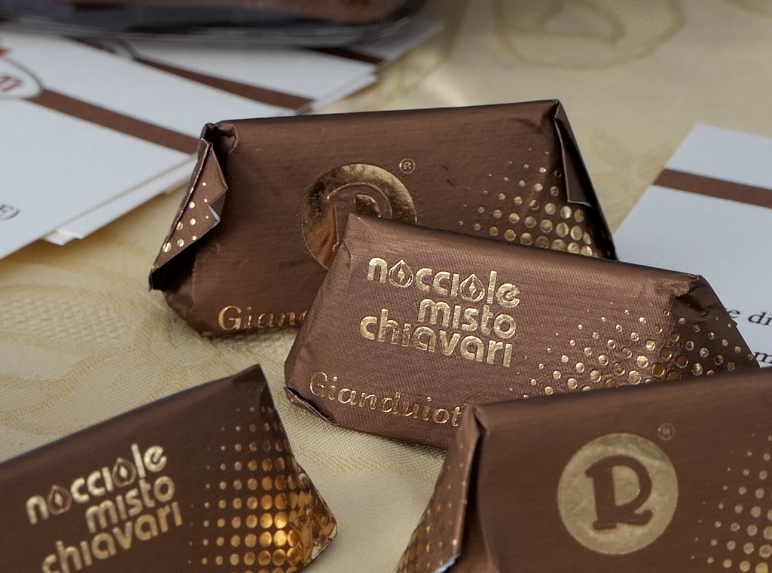 The Misto Chiavari hazelnuts are also in the production the Gianduiotto pralines. After having squeezed the Piedmontese and Ligurian hazelnuts, the Parodi Nutra company (Il Parodi gourmet line) felt the difference and chose to develop hazelnut oil with Ligurian crops. They are also trying to enhance the tradition of this production, telling its story. In addition to oil, they produce flour, hazelnut cream and hazelnut paste for ice cream makers. For the moment their market is Liguria, but soon they will export to the United States too ».

The Andrea Bruzzone company in Genoa has made a hazelnut liqueur with Misto Chiavari, called Levantello, while the Sergio Barbieri bakery in Chiavari uses Misto Chiavari hazelnuts for “Baci di dama” and “Brutti ma Buoni” cookies, recalling that even the Ferrero company bought Misto chiavari hazelnuts to strengthen the Piedmontese ones.

Rustic and productive cultivar with round shaped fruits. Shell of rather dark color. It has a fair commercial value. It has always been appreciated by the confectionery industry

Cultivar of limited development and with a rather wild appearance, with round and tasty fruits. Productive. Drought resistant. Also very suitable as a pollinator.

Available in the Chiavari hinterland they are local selections of limited cultural and commercial importance.

The "Villa delle Palme" school in Recco, the school of German Jewish refugees students in the 1930s